Not only am I launching a new blog about EDH (I’ve Got 99 Problems But a General Isn’t One), but it’s mailbag time! That’s right, I sometimes get real questions from real people and give you real answers. I ask my twitter followers for questions about Magic and they sometimes deliver. Let’s get to them.

Why do you hate MaRo so much? It seems like every few posts that you talk about him, you’re always bashing him and making fun of him or things like that. What did he ever do to you?

Short answer: I do not hate Mark Rosewater.

Long answer: It’s funny when you read online and assume that everyone hates each other. Like the tabloids do every day, they photoshop and make stuff up to sell magazines. Let me hip you guys on a little secret: people love conflict. That’s why they watch Lord of the Rings, or Grey’s Anatomy, or other movies/shows/stories (Honestly, the only time you’ll see Grey’s Anatomy on this site). People don’t read X-Men because Magneto and Professor X get along, they read it because of the struggles and the fights they get to. See: Family Guy’s parody of “The Even Couple” (Good luck finding it, I wasn’t able to).

So, while it seems like I’m hating on him, that’s not the case. By “fighting” when I’m trying to make a point, makes for a much more interested read. Do I worship the ground he walks on? No, because he levitates. There are things that I don’t like WotC doing from time to time but, and here’s the thing you have to remember, I understand it. I understand why Lotus Cobra is Mythic, I understand why Allies are the way they are, I understand why online has PTQ’s. Do I like any of those choices? No, but I get why they do it. END_OF_DOCUMENT_TOKEN_TO_BE_REPLACED

Ah October. Time for another set to roll in and a block to roll out. Just a friendly reminder: Extended rotates as well. No More Onslaught block nor 8th edition. See my B&R list for the full details. New month also means new mailbag. Let’s see what’s in here.

What’s up with all the talk about Twitter? It’s not the world’s greatest invention, so why is it always “Twitter” this and “Twitter” that I read on your blog. I don’t have twitter so there.

The question should be why don’t you have Twitter? You know who Tweets? Mark Rosewater. Aaron Forsythe. Evan Erwin. Mike Flores. Patrick Chapin. Bill Stark. Kelly Reid (QuietSpeculation.com). Me. That’s hardly everyone who tweets, just some of the names you might have hear or read some of their stuff. When I went to the Zendikar prerelease, I met MaRo who knows of me from Twitter, yet we met for the first time. I also met Jacob from GatheringMagic there where he also talked to MaRo, and I met bccarlso, someone I met over Twitter. I’ve traded posts with Jay from Magic: the Blogging (where yes the title of this post also “steals” that idea from him as well but come on, it’s an obvious one). I got to see Mike Flores and other pro players tweet it out to see if Lotus Cobra is the best 2 drop ever comparing it to Dark Confident and Tarmogoyf. This whole “Priceless Treasures” thing play out on both the rumor site and on Twitter. END_OF_DOCUMENT_TOKEN_TO_BE_REPLACED

I’m going to PAX on Saturday. There, hopefully, I’ll find get all five quests to get into the Magic Party that night and get some spoilers that they will be releasing there. All good, right?

Right (What, no trick question there).

Here’s what I’m planning to happen. I’ll have my phone with me, but it isn’t one of those smart iphones (I’m with Verizon), and I’m not paying for a new phone until hopefully the Storm 2 comes out (My brother says it’s going to be awesome). So I can send text messages, and the camera on it isn’t exactly the best so I can’t upload good pics (I know, I’m living in 1990 with my Zach Morris phone).

So I can tweet from my phone, but I can’t exactly follow everyone on my phone and Twitter doesn’t have it set up where you send me an @mtgcolorpie, I can’t get it. But, I do have it set up to have it text me if you send me a Direct Message, I get it (But if you abuse the power it will be taken away i.e. don’t PM me constantly; be smart, not the internet.) I’ll tweet from PAX and sometimes ask questions if I run into some from WotC (I played against Aaron Forsythe last year (@mtgaaron)) and if I do that this year, I’ll tweet it and see if he’s up for a question or two.

When I get to the party and find the spoilers, I’ll be tweeting what I’m seeing as well including pics taken by my camera (which will go up later that night on this website.) If you want to tell your friends (or rumor websites) about what I’m doing, please do.

Good stuff. So, follow my twitter feed (twitter.com/mtgcolorpie) and about 10:30ish AM Pacific time, I’ll open it up and we’ll go from there.

First I want to do the scavanger hunt go get into the party, then hit the Wizards booth (I don’t have a Xbox 360, but I’ll see what I can tell you about the new Planeswalker game), then card time (Thumbs up).

If you’re at PAX as well and what to meet up, just send me a Direct Message (duh). I’ll also have name tages to give out as well.

Questions welcome and hopefully everything will go smoothly (and I have no reason why it should). 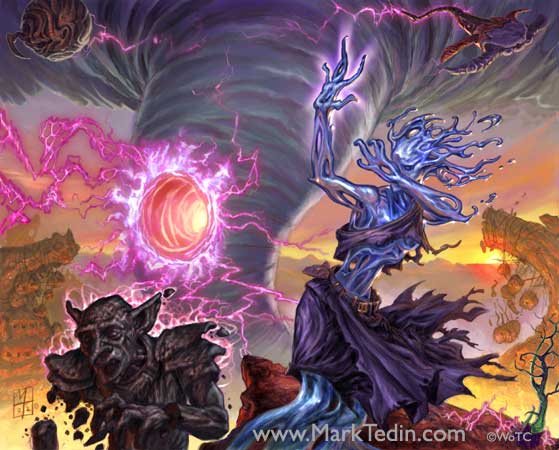 – I hope everyone had a good release event for Alara Reborn and pulled some amazing things or amazing plays.  I really like how this format is really playing out.  Cascade is amazing.  There’s a reason you only find them on multi-color cards (besides the fact that it’s only in Alara Reborn): it is too broken of a mechanic if it was mono color.  Imagine if Blue had a cascade card reading:

While there are some ideas of having a Cascade/Hypergenesis combo in Extended (you have to have the creature in play for it to work), it would be really broken if you could fit cascade mechanics into any deck.  Cascade has to be a multi-color keyword or it’s too degenerate.  I hope this is something Wizards will bring back (they sound more open to the possibility to reuse good mechanics).

– I was going to have a post last week before it got all busy on me getting ready for Opening Day of boating season here in Seattle (I was filming it).  Of course, you knew that if you were following me in Twitter.  Follow me and most likely I will follow you too; a tit for tat kind of thing.  I still don’t know what I should tweet (besides new posts going up) and I want to hear your opinions on what I should post there: