Ah October. Time for another set to roll in and a block to roll out. Just a friendly reminder: Extended rotates as well. No More Onslaught block nor 8th edition. See my B&R list for the full details. New month also means new mailbag. Let’s see what’s in here.

What’s up with all the talk about Twitter? It’s not the world’s greatest invention, so why is it always “Twitter” this and “Twitter” that I read on your blog. I don’t have twitter so there.

The question should be why don’t you have Twitter? You know who Tweets? Mark Rosewater. Aaron Forsythe. Evan Erwin. Mike Flores. Patrick Chapin. Bill Stark. Kelly Reid (QuietSpeculation.com). Me. That’s hardly everyone who tweets, just some of the names you might have hear or read some of their stuff. When I went to the Zendikar prerelease, I met MaRo who knows of me from Twitter, yet we met for the first time. I also met Jacob from GatheringMagic there where he also talked to MaRo, and I met bccarlso, someone I met over Twitter. I’ve traded posts with Jay from Magic: the Blogging (where yes the title of this post also “steals” that idea from him as well but come on, it’s an obvious one). I got to see Mike Flores and other pro players tweet it out to see if Lotus Cobra is the best 2 drop ever comparing it to Dark Confident and Tarmogoyf. This whole “Priceless Treasures” thing play out on both the rumor site and on Twitter.

Some people say that Twitter is just like that Version commerical with the dad tweeting “I’m on the Porch.” Sure, you can do that, but it’s much more then that. MTGTalk gets conversations going about certain topics with Questions of the Day. Zvi Mowshowitz tweeted an entire M10 review in nothing but Haiku. MaRo wanted to know how people feel about Mythics vs Rares. Sure, people tweet during tournaments on how their doing, and it’s interesting to watch that. But you can do so much more then that. People tweet strategy, decklists, which card should make a cut. The more you know about a game, the better you can be. When you go to a tournament, you can meet the other people you talk to online and have a conversation of more than 140 characters (I still talk in fragments only to stay in character). This is a different way of communicating, like forums or blogs. But I can be standing in line at the post office and tweet someone half a world away why I think that Lotus Cobra is overrated.

Don’t think of it as just updating what you’re doing. Take a look at some of these twitter pages.  See what they talk about. Sometimes it’s silly stuff, sometimes it’s discussing if Dark Depths will really see play in Extended, sometimes it’s talking about how a store got robbed and it may have to close down leaving players in the area no play to sling cards. Twitter allows you to communicate with other players, people who read the same stuff you do, and even talk to the creators. First it was letters, then phone calls, then e-mail and finally Twitter. You can actually tweet Mark Rosewater and tell him what you think of Magic. He really wants to know. 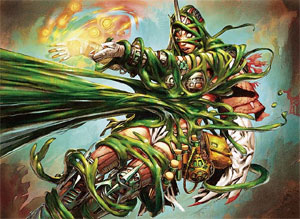 How do you feel about green getting an ability to deal with A/T [Activated/Triggered] abilities[?] How does this fit the color? – @GaabrielG

See, you tweet me a question and you can get it answered. At the moment, there’s very few ways to actually stop an activated or triggered ability (Bind, Pithing Needle,  Stifle, Trickbind and Voidslime being the most popular/effective), and most of the time when Green stops one of those abilities it’s an artifact. It’s actually a very little used ability that doesn’t see much play. Why not?

Well, it’s very narrow, most of the time seeing sideboard (and even main deck in very few occasions). Not every deck uses cards with activated or triggered abilities (though most do). Should we see it more countering of it? Maybe. One of my favorite cards that deal with this is Burning-Tree Shaman which is a complete Red/Green creature, doing damage for using artifacts or not letting your natural instinct take over. Could Green have a creature that reads:

No One Does Anything Toad – 2GG
Creature – Toad
Non-mana activated abilities that come from non-creature permanents can’t be activated.
2/3

Of course, I could see that as a White/Green hybrid/gold card as well. If this ability does become Green, it has to read non-creature permanents, Green wants nature (creatures/lands) to do it’s thing. This type of card I could see more of and think it might be a really nice addition to Green’s weaponry. Most of the item it would have to be artifacts or enchantment hate. Maybe Naturalize but with a Bind add on as well.

Or something like that. I’m not the language guru here.

Enjoy opening your Zendikar packs. If you do pull a #Pricelesstreasure, tweet about it. Hopefully Monday I’ll have something going on with the blog.