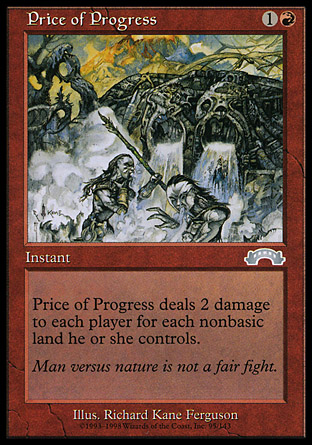 True story: While we were getting ready for the first round of SCG Seattle Legacy tournament, I was watching a player associated with a famous MTG strategy site play his deck versus another player. He played Price of Progress. Having never really played that card before, he didn’t know that it actually did 2 damage instead of 1. We all laughed at his error as he learned something new.

But if he had playtested more, he would’ve known.

To be fair, I’m sure this was format he hardly played and he most likely got this list either online or from a friend. Not everyone knows every card in every format but most people would know what the cards in their deck would do, but playing it before the tournament would help with that situation.

I’m not bashing him nor making fun of him. This guy has only been nice when I’ve been in contact with him and he’s a very smart player, but even the “pros” don’t always know what cards do when they pick up a deck for the very first time without hours upon hours of playtesting. And that’s where my situation comes in. I didn’t playtest for SCG Seattle. I went 0-2 drop. This isn’t a tournament report about what I did wrong, this post is how I’m perfectly fine with that situation.

It’s all about getting to Carnegie Hall.