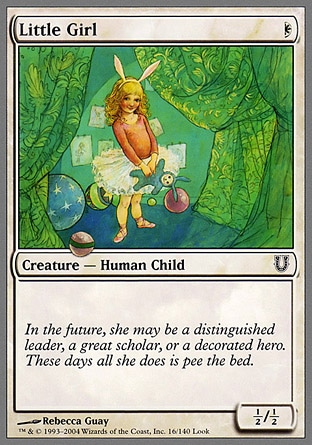 Editor’s Note: Being a fiction writer, sometimes all that comes out of my fingers when I write is prose that just meanders for a while. Elmore Leonard explained that the term is called “hooptedoodle” and sprung from John Steinbeck’s book Sweet Thursday. It’s a non-sense word that doesn’t mean anything; the author is just going to write a while for fun. This is one of those times. Some of you might like this, others will think I’m wasting your time and for that I apologize. You may skip this post, and I wouldn’t be hurt. This isn’t required reading by any means, but I wanted to get this semi-Magic related story down. – MtGCP)

Here’s a story I’ve never really told anyone in this much detail. It’s quite long and it briefly ties into Magic. It meanders all over the place but it doesn’t have as many asides as you might be used to with my writing. I understand I might not be selling you on this piece at the moment, which is the first thing an author has to do. Ignore this paragraph and focus on the hook:

It was just over three years ago that my wife and I brought our youngest daughter, Katie, home from the hospital. Here’s what you might not know:

Nothing prepares you for that. We were training our 18 month old daughter Lizzy to sleep in her new toddler bed, her old crib was just moved upstairs to the new baby’s room. One night my wife feels something’s a miss, but she’s not in pain (they tell you if you’re in pain go to the hospital, that’s when something might be wrong). She visits the doctor in the morning and I meet her there. The doctor says, “You need to get to a hospital, your water broke. The baby may come early.”

Worried and shocked, we head to the nearest one with a NICU (Neonatal Insensitive Care Unit) that can take an premature baby of her age. After a quick sonogram an doctor confirms the issue. The day my wife entered the hospital she was an estimated 24 weeks of gestation, the bare minimum for there to be a chance of survival for the baby. It wasn’t a quality of life survival, but surviving at all. If the baby was born at that moment, the doctors would’ve given her 20% of living. That’s just better than rolling a 6 sided die and calling it.

Roll a die. Did you get the side you wanted?

END_OF_DOCUMENT_TOKEN_TO_BE_REPLACED 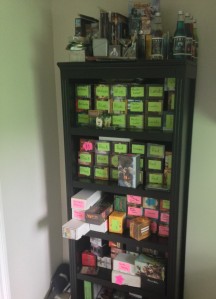 Last month, Mike Linnemann published an article on GatheringMagic where he showcased how players store their Magic collection. Mine was featured (thanks Mike), even though I just showed him my storage bookcase of my cards and not the entire room. I’ve wanted to do this post for a while, and because of certain events it’s either now or never. We’re going to peak behind the curtain and I want to show off just a little bit.

We have a room in my house that my wife and I call “The Creative Room”. But this wasn’t the original purpose of the room: first it was an office for myself. My wife had her office on the first floor until our daughter was born. Then we had to reconfigure and merged our offices together into another room upstairs which is also going to be the playroom for the baby. This room was a remainder and we made use of the space. END_OF_DOCUMENT_TOKEN_TO_BE_REPLACED 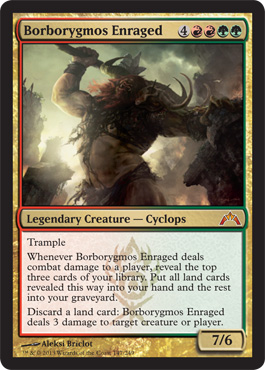 I didn’t get a preview card.

That’s fine. I’m a small time blog and none of the other small time blogs received a preview card as well. So, no biggie. But a funny thing happened on the way to the Gatecrash Prerelease. I received a phone call from Borborygmos, which is odd because not only does he not like technology, he’s a fictional character. Anyway, he didn’t receive a preview article. I was shocked. Here was one of the guild leaders and he wasn’t previewed like all of the other leagendary leaders.

I interviewed Borborygmos for a few minutes. I really don’t want him to crush me.

BORBORYGMOS: No need for formal. Call me Ishmael.

ISHMAEL: No. Only joke. Better than saying call me maybe. END_OF_DOCUMENT_TOKEN_TO_BE_REPLACED

I was going to create a card for this situation, but realized one had already been made:

END_OF_DOCUMENT_TOKEN_TO_BE_REPLACED

SEATTLE – It was announced today that game company Wizards of the Coast has bought the NBA team “Washington Wizards.” Self proclaimed “World Leader of Hobby Games” was able to scrounge up enough money to bring an NBA team back to the Pacific Northwest.

Ever since the Seattle SuperSonics were bought by Oklahoma City businessman Clay Bennett and moved the team to his home town besides declaring when he bought it that would not be moved, the Seattle area has been desiring a team of their own. NBA commissioner David Stern once condemned the Key Arena saying that it wasn’t good enough for an NBA team allowed the team to relocate.

Along with the purchase of the Washington Wizards, Wizards of the Coast has also announced that they will build a new arena in Renton, just south of Seattle, next door to their headquarters. “If Magic players wondered why we started the Mythic Rarity, it was to bring an NBA team back to Seattle,” Head Designer of Magic Mark Rosewater said. “We’re sorry, and we’re going to get rid of it once we finish paying off the loan for the new stadium. It was the closest thing to printing money we could think of.” Head Developer of Magic Aaron Forsythe chimed in, “Well, that and Jace as well.”

“The Wizards of the Coast employees are local heroes,” chimed in Ben Loche, a Microsoft employee. “They were able to do something that no one else in the area has been able to do: bring an NBA team back to Seattle. And a new stadium? Wow!”

“We already had the web domain name ‘wizards.com’ anyway, so we got together and thought, ‘might as well get the NBA team too.’ And think of it this way,” Forsythe continued, “At least Dan Stienberg has one less thing to complain about.” When reached for comment, Washington DC based Washington Post sports writer threw his hands up. “Well, that’s that.”

More details as it comes in.

Details about this story at the The Starkington Post: Sports Columnist Pissed at Wizards.