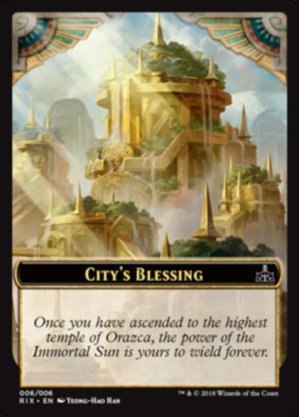 First, if you came over from the Beacon of Creation Podcast where I was a guest, welcome. If you’re just hearing about this Beacon of Creation podcast, take a listen. Adam and Bradley host a podcast about Magic design and the lead up to the Great Designer Search 3 (more info when that kicks off). I’m on Episode 5, which you can find right here.

We talked a bit about some of the Rivals of Ixalan cards that had been previewed that day (we recorded on the first day of Rivals previews). There was one new mechanic in the set that we briefly touched upon that I would like to go further indepth.

Ascend (If you control ten or more permanents, you get the city’s blessing for the rest of the game.)

Ascend is a Threshhold mechanic meaning it needs a criteria to be met for it to turn on (ala, Threshhold from Odyssey block). What’s the most interesting part of this mechanic is that it can’t be turned off. Once you have Ascend, you can’t lose it, even if you have no permanents left on the board.

This was done on purpose.

To understand Ascend, we need to go back a few sets, to Conspiracy: Take the Crown.

It was mentioned with Conspiracy 2 came about that they took a mechanic from a set in 2017/2018. This has been heavily implied, or even confirmed, to be Monarch- a great multiplayer mechanic that encourages people to act in the game rather than just sit there. Early playtesting of a Monarch-like mechanic in Rivals of Ixalan showed some problems. From Ben Hayes:

For example, a lot of the mechanics we tried out early on had some element of granting extra power to one player, but only being attainable by one player at any given time, and passing back and forth, similar to the monarch in Conspiracy: Take the Crown. What we found with those types of mechanics when they’re applied to one-on-one settings is that they mostly lead to very “snowbally” games where the person who gets ahead and can get the thing can use the advantage they’ve gotten to keep the thing and stay ahead.

Mechanics that help the player stay ahead and shove the losing player down can be unfun, especially in a two player duel. Mechanics that just help the losing player can also feel bad (ala, the Blue Shell in Mario Kart) because it never can feel as if there’s an ending to the game or if you should focus on winning. Ascend only cares about what you have and anyone can have it, making it an equal opportunity mechanic.

But let’s get back to the most worrying part of the mechanic: it can’t be turned off. Once Ascend triggers, then there’s no other way to interact with it. With one other non-interactive mechanic currently running through Standard *cough* Energy *cough*, there can be a reasonable fear of this becoming too powerful. Like with any mechanic, it all depends on what cards are printed and how the environment is set up.

There’s a built in safety valve of a traditional Threshold mechanic but it’s something else that you, the player, has to keep track of turn the game. And not only for your stuff, but for your opponent’s. It gets too complicated to keep track of everything on the board when when you’re trying to see what happens when you turn on or off the mechanic repeatedly (This is also why we don’t get like a Threshold 3 and a Threshold 7, because trying to keep track of everything makes the math harder and more time to just sit and work on too many lines of play). Being able to un-Ascend could lead to some great combat tricks (Kill your enchantment, your creature is no longer Ascended so it loses that +2/+2 bonus and is now a 1/1). Is losing edge case combat tricks good enough to keep that safety valve alive? Most likely not. Energy, for example, it’s not just used for combat tricks but for other aspects of gameplay as well.

Two other concepts have to be considered for keeping the mechanic on once it’s triggered: Change and the long game. A card represents a single point in time and space. WotC has dabbled with cards that have changed in some way over the years (double faced cards, and basically all threshold mechanics). To change something on the card naturally (ie, without help from auras) is something that will always be explored by designers. This is just another aspect of that search. Players like bonuses and they feel better when they can make it happen in fun and exciting ways (“And then I flashed in my creature when gave me Ascend so that…”). So when you “find the city”, which is the flavor of the mechanic, you always know where to find it; you’re changed by being blessed by its discovery.

The second is the long game issue. One of the tricky parts of Magic is the randomness of your library. Since cards can be drawn in random order, sometimes you get cards that you don’t want at certain times of the game (That 8 drop on turn 2 or the Birds of Paradise on turn 15). Mark Rosewater has talked about how one of his favorite designs is Werebear. 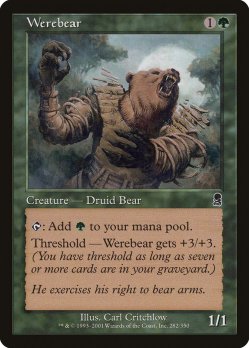 As you see, Werebear has the original Threshold mechanic but it’s the whole package together that makes the card special. In the early game, when you want a cheap mana producer, you can get one. But, one that’s no longer needed and through the natural course of gameplay, this can be a 4/4 for 2, which is still quite viable. If you draw it late or it sits on the battlefield, it still has purpose and can be valuable anytime during the game (within reason, obviously).

If you compare that to Llanowar Elves, the elves are a dead card latter in the game when you don’t need a mana producer and a 1/1 is too small to affect combat (edge cases excluded). What Threshold mechanics do is make a card viable in multiple parts of the game if it’s costed and designed properly.

Since Ascend never goes away and you can plan on it turning on most games where it’s used, you can backtrack the design of the effect to where it A) disrupts the board to make it meaningful and B) helps end the game quicker. None of the printed effects say, “Deal 3 damage, if you have the city’s blessing, deal 5 instead.” which is a nice change of pace from effects we would usually see. In fact, there are only 2 Red Ascend cards which help push the notion that Red wants the game done quickly rather than a long drawn out game. There are White weenie cards that get bigger, cards that allow you to draw, and Black cards which can help end your opponent.

Cards with Ascend allow players to decide if they want to play it now to get a small benefit or wait and hold it for a larger effect. Luckily, with the permanents, you can naturally grow into that so you don’t have to feel bad for playing something earlier. None of these effects are backbreaking where if someone has 10 permanents on the board on turn 3 (for whatever reason), then it would completely destroy the current played game (ala Dredge). The mechanic, with its current printing, is to show help end it eventually.

If the goal of the mechanic was to fight for trying to constantly get to that magical 10 permanent number and keep it there, then you’re likely not to attack and just sit there in the board stall. The game is not fun when it’s draw, go. Being unable to turn it off just means you’re going to have to get rid of the threat instead of just the mechanic itself. Ironically, it promotes interactivity while being and uninteractive mechanic.

So is Ascend the next Energy? No. Even though the effect can’t be turned off, it’s not a resource which can ebb and flow during the game. Ascend is either off or on which makes designing much easier. I don’t know if we’re going to get any constructed viable cards with Ascend, but there’s plenty to be excited about here. Who knows, maybe sometime soon we’ll see another threshold mechanic that doesn’t turn off.

One thought on “Let’s Talk About Ascend”