We’ll fix it in the flavor text…

I have this habit of calling Unstable, Unhinged. As I wrote the title of this piece, I did just that. I always thought that Unhinged would be the last Un-set unless something drastic happened. Well, no matter how much people try, the world hasn’t ended and we received a new Un-set.

I always believed that the Un-sets were a great way for Magic to poke for at themselves and do things that couldn’t be done in “normal” Magic. Some of the favorite “non-traditional” things have come out of Un-sets: Full art lands, split cards, tokens, ability words (think “Gotcha to Landfall”), etc. And Mark Rosewater has said that besides the printing technology, one of the reasons to push Unhinged was to explore possible future space.

Well, what can we find in this new Silver-border that we might see in Black-border land a few years from now? Let’s go exploring for possibilities.

Augment
Augment [Cost] ([Cost], Reveal this card from your hand: combine it with target host. Augment only as a sorcery.)

This is the big one that we could see sooner rather than later. Ignoring the cute Half-Kittens for the moment, combing cards together isn’t an entirely new idea within Magic. We have the Meld cards with double face and we have Bestow creatures from Theros block. The current trick with Augment is having two halves of a card fit together, one for the trigger and the other for the effect. Will they all be as basic as what we see? Most likely not, but it’s a good starting place to see how deceptively powerful the mechanic can be. It’s a pretty parasitic mechanic because you have to have certain pieces to make it work. This is not something you can just haphazardly add to sets that aren’t built around it.

Since the move to single set blocks, this might just be an easier task to pull off since you only have to worry about the draft environment for one set. The rare distribution is pretty easy at the moment: you need more Hosts than Augment creatures so Hosts are at common while Augments are uncommon. There could be a few upshifted cards, especially hosts since you could get bigger effects, but there still needs the numbers to have them there in draft to make them work. If this is added, it’s a one time thing; I doubt we’ll have any of these creatures in Master sets. Along the competitive constructive side of Magic, there has to be enough pay off so you don’t get 2-for-1’d, something Equipment was trying to solve with Aura’s problems. There has to be a powerful enough combination to see competitive play, otherwise I think the whole keyword is doomed from seeing print. While it’s mainly a limited/casual mechanic, WotC tries to at least make a push for each of its mechanics to see some competitive play.

I do think something like Augment will see print sometime in the future as a testing ground. There will always be mechanics that combine two cards together to form a new one but this seems like it’s the most open-ended idea yet, which gives it some legs. 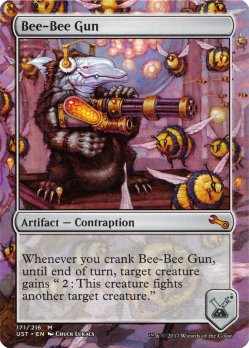 Alas, it was ruined.

I’m alright on Contraptions, I think they’re fun and quirky and exactly what Un-sets are all about. I’m not going to go on a “It’s not true Magic” about adding in a second deck to play since there are tons of games that do that. As a Johnny, I love to ability to create a wacky machine and do funky things with it. I recognize that the Contrpations were borderless so that in the future they may be able to be included with Black-bordered sets (the only Silver-bordered cards are the cards that assemble, so it’s impossible to use them in competitive play).

I can see the addition of Contraptions in “normal” Magic because of the effect that it has on opening up gameplay. However, it does have two strikes against it. 1) It’s a heavily parasitic mechanic (again): you need to construct a set around both the keyword Assemble and the Contraptions themselves; right now you get two Contraptions in a pack (thanks to printing technology, which if it works, can open the idea to having certain cards in certain packs opening up the possibility of new mechanics). So much of the set has to be devoted to this one mechanic as it eats up so much space. B) We’re getting back into the competitive side again: now we have two random decks that could make the outcome of winning thousands of dollars less on play skill and more on luck with shuffling.

Both Augment and Contraptions have the same problem: so much of the set has to be devoted to it as well as the problems on constructed playability. These are also much more complicated mechanics that WotC wouldn’t want to introduce to newer players as well as New World Order (he said as much in the LRR interview which is a much watch). How do they see print then in Black-borders?

With Conspiracy, it’s a draft focused set that doesn’t need to have impact for competitive constructed purposes (if it does, it’s Vintage and Legacy). There the draft is the experience and mechanics that work better for limited and casual can show up in these type of sets for Black-bordered. If I was going to introduce either of these two mechanics to “Real” Magic, that’s how I would do it. If there was something more powerful that might see play, Vintage and Legacy have a far better time adjusting to it than Standard/Modern.

By Gnome Means – I could easily see something like this see print. It’s a little wacky but it doesn’t really break any taboos about counter types.

Let’s stop here for a moment. Never have cards with the same name had different abilities (save printing errors). One of Mark Rosewater’s biggest worries is the longevity of Magic and the name resource: will we run out of useful names for Magic cards. There was some discussion about trying out unpopular cards with useful names and reusing the names. While this is fun messing with the printing technology, this might be an attempt to see how this same name concept plays out. Using “Teleport (Legends)” and “Teleport (Ravnica 3: Return of Jace)” might be in the future because if there was a place to try out this concept, it’s an Un-set. Because once that happens in Black-Bordered land it won’t go back. Do I think it will happen? No idea, I’m just pointing this out.

Animate Library – I don’t think you can make whole Zones creatures in regular Magic. However, the trick with this card is enchanting Zones in the first place. This opens up the possibility of making cards that enchant player’s hand or their graveyard instead of just a normal enchantment. Enchanting cards in different zones has worked before (Future Sight’s Spellweaver Volute), but whole zones? We already enchant players so this might just work out.

Extremely Slow Zombie – The rules have to be reworked to make Last Strike a keyword, but there’s nothing saying that you can’t just tweak it slightly. It could give attacking creature it blocks First Strike or deal its damage after combat so it’s not really combat damage. It’s a concept that’s easy to understand I just don’t think that rewriting the rules for a few cards are worth it. I do think the concept of doing damage a different time is worth looking at.

Hangman – Magic has mini-games and side quests all of the time. We’ve seen this type of effect on creatures like Magus of the Scroll. The new part is either player can activate it and there’s an end game, both which make the card fun.

I do love the idea of random dice rolling in Red. Sometimes it works out for them, other times it’s a disaster. You’re willing to take that risk for the now rather than a safer bet in the future. If there’s one card in the set that I really, really, really wish it was Black-bordered it would be Painaic. Again, the downshift in printing coin-flipping cards in Black-borders I get because you don’t want the Pro Tour championship to come down to random chance, but I miss random effects sans a Warp World variant in every set. If you replace dice rolling with the effect of looking at the Xth card of your library and using the CMC for its effect, then it could be something. But people didn’t like Clash. I do think Red needs to get back to more randominess though.

Earl of Squirrel – I’ve always liked squirrels more than Saprolings. WotC, make them like they stepped out of “The Secret of NIMH” or “Redwall” and you’ll be fine.

One last thing: I love the sketch that was included for Very Cryptic Command from the late Wayne England. I think it was a great tribute to him. But I also love the idea of sketches in general for art. The white with the Blue card frame is quite striking and identifiable. I know this can’t be done for every art, but for some promos, this would be fantastic to see and something that can be done without foiling a card. Players always love to see behind the scenes (take this blog as an example), and this gives players another option for art. It certainly brings more attention to the artist. Just something to think about WotC.

In all, I think that Unstable was pretty well designed, especially for limited play. While it doesn’t have as many callbacks to cards that I would like to see, it does enough to make an weird enough format people will want to try out. If there is an Un-4, I hope it’s not for another while. It’s something we’d love to see in 5+ years or so. This time, can we try to make landscape art basic land? I still think that would work well.

That’s it for now. I’m going to try and get an end of the year post together. If not, you’ll see me in the new year when I start talking about the Great Designer Search 3. If you’re on reddit, join us over on r/GDS3 for discussion.

Remember: be good to each other.