Editor’s Note: I’ve been sitting on my PAX report for a while after some delays (my brother getting married, life and work). I’ll visit it later; it hasn’t come out the way I want to.

Earlier this week, Pro Player (and notably better Magic player than I) Paulo Vitor Damo de Rosa put out an article on ChannelFireball.com called “Everything That’s Wrong with Battle for Zendikar.” In it, he explains why he doesn’t like the philosophical direction that BFZ has gone and believes it’s a bad set. He came from the angle as a competitive player completely acknowledges that angle; that’s what I want when I read something from him. While I don’t fully agree with his position I want to take a look at this groundswell I’ve seen online about the hatred for BFZ.

There has been a little bit of an issue with Channel Fireball moving his article around trying to hide it so it doesn’t effect sales of the new set in their store. I’m not looking to comment on this as I’ve had my own issues with a large online retail site/store before with their content. I’m all for an author writing what they believe without being tied to sponsors; that’s the major reason why I don’t have advertisements on this blog. If I write something like Paulo had and a sponsor didn’t like the content and this article might hurt sells, I might be pressured into writing something different or censoring myself. Paulo wants to start a conversation while giving his thoughts on the topic, and I fully applaud that even if I don’t agree with him.

It’s taken me a while to warm up to several aspects of this set, most importantly the exile aspect of the Eldrazi. I’ve seen plenty of people want to use the Exile zone as another zone to play with (especially in player designs), and this is something I completely disagree with. Before Odyssey, the Graveyard was a zone where you almost never got cards back from it; now it’s seen as a second library in some decks. There needs to be a safety valve in a game where you can remove problem cards from play and Exile needs to be that zone. After talking with MaRo at PAX, he sold me on the Eldrazi exiling cards because he had the same issue. The Eldrazi, as you’ve seen, only play with opponent’s Exile zone. The point of them is that they mess with your opponent while you can’t abuse your own Exile zone in the process. As long as messing with the Exile zone doesn’t go further than this, I’m okay with the Eldrazi within this play space.

Playing Nicely with Other Sets

One of Paulo’s main arguments was the lack of synergy between BFZ and the Tarkir block. He explains that Tarkir is a multi-colored block and Battle for Zendikar is pretty heavily colorless. This is a huge swing in the pendulum between the two blocks. The last time we went to a major colorless set the swing was from Zendikar Block to Scars of Mirrodin (pretty gradual as we were going through the colorless Rise of the Eldrazi). The block before Zendikar was the multicolored block of Alara which was a huge shift in colors as well (though not as much as what this is going on here). You can see the subtle clues in Tarkir of the colorless future that Magic held and see where some of the colorless can fit between blocks:

That’s right: the one (three) major mechanic from the last block is based on colorless creatures when they’re face down.

Suddenly cards like Dominator Drone, Dust Stalker, Forerunner of Slaughter, Herald of Kozilek, Ruination Guide, Shrine of the Forsaken Gods, Tide Drifter, and Vile Aggregate can be placed in decks with Den Protector/Mastery of the Unseen. I’m not saying shove them all into a deck and you’ll win a PT, but it can be a starting place.

But, the whole block of Tarkir isn’t multicolored, only one set was heavily multicolored. The other two sets have near about the same amount of multicolor, if just slightly more, than the recent sets. In fact, here’s a table:

Theros was coming off the multicolor block of Return to Ravnica and Battle for Zendikar has almost the same number of mutlicolored cards (for this instance, it’s how to cast it instead of rules-wise about it being multicolored, only 14 are “true” multicolored cards). This isn’t a shift from Ravnica to Mirrodin where they’re at polar opposite ends of the spectrum, that’s something I expected to see from WotC pre-Onslaught when the next block wasn’t planned until work started on it. Paulo might be disappointed at the number of viable of multcolored cards in BFZ for competitive play, but it’s not for the lack of numbers. 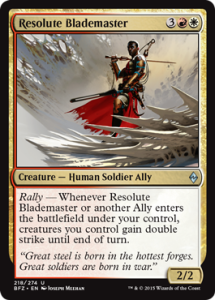 Keywords Looking for the Gatekeeper

There’s a number of keywords in this set, but they can interact with keywords from the previous block. It’s not as cohesive, minus the face down cards which are colorless, but there’s still some crossing there. Creatures with Ingest might seem out of place without the Processors but they can help slow down your opponent’s Scry. But then if your opponent has Processors and you have a Delve deck, you want them to give you more cards to keep your graveyard filled.

Paulo’s issue with Allies is something that I somewhat agree with, to a degree. There’s no nice visual cue about what is or isn’t an Ally and I think that was a huge mistake as well. I don’t think there needs to be an indicator on a card like the Miracle frames, but a visual clue like the Kicker ones from Invasion would’ve been cool (except less subtle). I read on MaRo’s blog where a reader suggested a watermark and that might be okay. Allies aren’t my favorite creature type, they rank above Slivers for me for my least liked. This time around Allies have more to do that just have enter the battlefield triggers and that’s what makes it more exciting. Sure, it’s a parasitic mechanic but there’s more variety with them this time. It’s like complaining that Dragons in Dragons of Tarkir were too parasitic since there were 3 total in Theros block (we’re looking at Standard, which is what PVDDR is talking about here). I’m sure we’ll get some more in Oath of the Gatewatch but like he said it should be about the here and now. I’m okay with this new creature type shift.

The complaint of a lot going on in this set is a very valid one and I mostly agree. This seems like plenty of mechanics to fit into a large set. PVDDR says that Devoid and Awaken could be interchangeable save for the exile tacked on to the card. They are two separate keywords that do different things for the spell. Most of the spells in Magic that you see with a keyword can be replaced with another keyword and work fit just fine. This is just the first time in a while that we’ve seen it in a Standard environment; it can be easy to forget what Return to Ravnica brought to us with keywords. Devoid is a flavor/small gameplay style of keyword (it might change in OGW) while Awaken is gameplay/flavor keyword. Might the set have been better without them? I don’t know; Devoid seems like it can only go with the Eldrazi while Awaken makes sense in Zendikar because of the nature of the land. It seems like at the moment this is the only place to see the both of them used.

The addition of Converge is an interesting one to me. It’s clearly a nod to the multicolor block before it but with the push of colorless it seems out of place. That is until you remember that Allies want to be in as many colors as possible and there are plenty of Devoid cards that are multicolored. Does Converge need to be in this set? I’d say no; it seems like an idea like Sunburst in Fifth Dawn where an artifact block was suddenly trying to get you to play as many colors as possible. This one I’ll chalk up to “Wait and see why this is here,” but it may be just too much like Inspired in Born of the Gods, just unnecessary.

I can see where Paulo and other are coming from when it comes to looking at Battle for Zendikar. Is it my favorite set? No; I only see a couple pieces that interest my Johnny deck building. Of course that can all change when I sit down to play with the cards. The set looks fun to draft and I think it does have impact on other formats like Casual/Commander. There’s an easy complaint that WotC is focusing too much on Commander but this isn’t as bad as other ones I’ve seen. But looking at this set from a competitive angle like Paulo did, I can understand the disappointment. It might be a little sensationalist to say that it’s his least favorite set without playing it, and that’s all PVDDR is at fault here.

Somebody reading my work for the first time must think I’m so fanboy who thinks WotC can do no harm. While I am a passionate fan I do see plenty of faults with WotC. Battle for Zendikar is far from a perfect set with multiple ideas and concepts going on at once especially with the most complex (design wise, not game wise) card I’ve seen printed in a long time in Ulamog’s Nulllifer. Looking at the angle Paulo did can give a very skewed perspective; but if you look at the 10,000 foot view, it’s much easier to see where all the pieces fit.

The easy argument is to say, “this set is not for you, not everything is for you so wait for the next set.” If you believe the internet when a new set is released, it seems like this is the third year in a row where WotC is making sets that no one likes. While there was some truth in that for Born of the Gods and Journey into Nix, the Competitive Standard scene has always found new decks with the new sets being released. What I think one of the major issues that I see with this is that everyone wants to try and shove the new cards into already established deck archetypes but when a rotation hits it never works out that way. Magic is built on change. Having the same style/types of cards and the similar decks is boring and will lead to stale gameplay. Players should stop looking to repeat the past and should be exploring new areas.

Of course, this is an over-simplified look at the situation and Battle for Zendikar in general. I’ve always believed in Einstein’s philosophy of to never stop questioning anything and that’s what PVDRR did here. It’s great to have different opinions and for the most part I have a different opinion of how Battle for Zendikar fits together than Paulo.