Ever since Magic was first created, White has had a split personality. It’s been separated into two distinct camps:

Now, every color has aspects of both, but with White it was never so prevalent. What White was trying to accomplish the idea of the “army” and righteousness with “fairness” at the same time. However, it’s the only color that makes you feel bad for trying to cram everything that the color can do in one deck.

But with White, you couldn’t do that. You can’t play a bunch of creatures, then Wrath of God or Balance. That defeated the whole purpose of playing all those creatures in the first place (With Wrath of God, and Balance both being reset buttons of “righteousness” and “fairness” (One player can’t get ahead of the other player)). Sure, there was Banding to help the small White army deal with the larger creatures of the other colors (and we know how well that turned out), but you couldn’t play an all encompassing White deck. Unless you played a traditional White Weenie deck that relied on a control element. The only reason that White Weenie was able to survive as an archetype was because of one card:

What should be a “fairness” card (one player can’t have more land than another) suddenly turned into an aggressive’s deck best friend. By playing your threats early then blowing up lands so the other player couldn’t stabilize, White Weenie became a favorite and power style of play. As long as White had its army of one and two drops that were “better” than the other colors as well as a way to “destabilize” the board after a few turns, it continued to see play.

But White has shifted away from “unfair” global reset buttons. Except for Wrath of God variants, the most recently printed Armageddon style disruption spell was Global Ruin in Invasion. That is almost 13 years old and not a legal set in Modern. Guess how long White Weenie has been mostly irrelevant? At the same time, creatures of all casting costs were getting better so White’s weenie rush just wasn’t viable anymore.

Elsewhere in the color pie, there was a deck that was picking up steam that followed similar style of play: Sligh. If you’re unfamiliar with the deck type, here’s a quick run down. Basically, it was a Red weenie deck that relied on tempo and a mana curve rather than just small creatures with a way to stop the opponent from doing anything. The deck was quick, and really, because of Red’s love of direct damage, didn’t need an Armageddon style spell to disrupt the opponent. The deck had finishers (Fireblast, Scroll Rack, Ball Lightning), it was just more damage to push the opponent below 20.

But the point of this isn’t to talk about bringing back Armageddon, it’s for something else entirely.

See, White is all about the Army feeling: their troops are better (and more numerous), than our troops. White’s creatures are going to work together to defeat you. And you know what the best two White army decks have been? Rebels in Marcadian Masques block (using smaller creatures to bring out bigger creatures). Goblins in Onslaught block. What, wait?

It’s time for White and Red to examine their place in the weenie aspect of the Color Pie.

As you can see with that mini history lesson, both White and Red are battling out for the top spot in the weenie color. For a while, every color was getting in on the big creatures, small casting cost game: there was Green Stompy, Suicide Black, and I guess Fish is more tempo setting. Both Green and White relied on something besides creatures to win (Winter Orb and Armageddon respectively) while Black and Red could win by brute strength of damage.

Now effects that have been helping White, Black and Green win with weenies have gone away (Mass land destruction, Hatred effects, preventing players from untapping by an artifact), Red is the only one that can sustain that ability to continue to live in that weenie area with support. However people, and especially WotC, continue to try to make White Weenie happen. Why? Red and White are the two more “army” like colors, which is why they fit perfectly together for Boros. They both love attacking, they both love getting an advantage in combat. This is nothing new. This is why Batallion and Battle Cry are great for these two colors.

One of the better non-mechanical ways to enforce the love of attacking is to make bigger creatures at smaller costs. You’ll want to play them earlier and attack sooner than the other colors. See: when I talked about White’s one drops. But this isn’t the only way to create the love of attacking. By showing cards that can work together, as if they are different functions of an army, you can demonstrate attacking and group feeling in White. This is where we get to the Onslaught Goblins example:

This deck had so much synergy. Except for the aforementioned Rebels, White has never gotten a deck to just work together on all levels. You would think that a color that specializes in combat and helping each other out would be more organized than some Goblins, right? Yes, some of this was direct damage related (White doesn’t really do), and some of it was sacrificing the now for the future (A Red trait), but the concepts of sum is greater than the parts should be White’s direction.

White’s Humans in Innistrad were a push in the right direction. Champion of the Parish, Doomed Traveler, Fiend Hunter, Mentor of the Meek, Midnight Guard, Selfless Cathar, Thalia, Unruly Mob and Village Bell-Ringer are good pieces of a whole idea. This is much different than earlier high-profile “return to White Weenie” cards like Knight of White Orchid, Puresteel Paladin and Student of Warfare, all of which are greedy in their own ways (they don’t work together and require you to invest in them to make them useful). Since Innistrad was a tribal set, it made sense that most of these were Human cards which is why they could push them because it wasn’t affecting the color as a whole. Cards like Fiend Hunter acted as removal while still being a threat, ala a weaker Siege-Gang Commander, and Selfless Cathar made your army bigger which is something that Goblins didn’t do. This is what I want to see more of.

Well, and tokens. Sheer numbers are a great indication of army. By having one card turn into “three cards”, you can easily depict the army feel. A single removal spell doesn’t stop the beat down when they have more than one token in play. It’s not out of White’s ability at all to make tokens, so it’s not like we’re trying to push an aspect that isn’t there. Innistrad’s White did a great job of that as well. And what’s fantastic about tokens is that you can still have the early beatdown strategy, or have it work for more of a control route later in the game. This allows White to tie its strategies a bit better rather than the dichotomy it has now. White is still the only color that shifts strategy as the casting cost increases. Because of this, it’s very hard for the color to get an identity to nail down.

Which brings us to Red. If I’m talking about promoting synergy in White, I’ll make a nudge for more powerful “single” creatures in Red. This color should get the larger creatures for a small cost but without the synergy that we’ve seen in the past. There’s a couple of ways of doing this: Tit for tat and uncoordinated benefit.

With tit for tat, I’m thinking along the lines of Jackal Pup. You can have the larger creatures, but generally there’s going to be a small drawback for it otherwise it’d be too good. There’s some of that going on recently (Gore-House Chainwalker, Hinterland Hermit, Mogg Flunkies, Reckless Waif, Slumbering Dragon, Vexing Devil) and, again, it’s going in the right direction. Red doesn’t care about the future, it doesn’t concern itself with 10 turns down the road, let alone next turn. Why don’t we have more cards that reflect that? 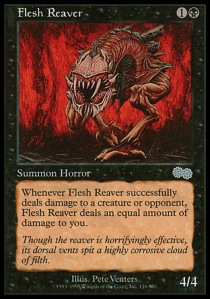 Here are some candidates for a good “colorshifting” that I could see in Red:

Of course, this is semi-getting into Black’s weenie territory, but I feel that Black has ventured away from the Suicide Black model that was used before. This section won’t eat away at all of Black’s weenies, but make a bit more room of them. There’s the always popular “die at the end of turn” mechanic that fits perfect in here (and if people liked Echo, this is the place for it).

The other way to give Red is the uncoordinated benefit way. Instead of something like Goblin Piledriver, where you want Goblin cards, you have something like Kruin Striker that thrives on more weenie creatures. Kruin Striker is great for Red instead of White or Green because even though it benefit off of creatures, it’s only a small onetime bonus and the best way to use it is before your attack phase meaning you don’t have combat tricks in your hand. It’s a “All-in” card that you want Red to get behind. These cards will be fewer than in other categories, but could show up enough to help establish that idea in the color (I still think it’s a most virgin design area at the moment).

You still can have good Red weenies like Stormkirk Noble (you want to keep attacking), and Goblin Arsonist (Just try to block/kill me) because the color deserves that as well. I’m only suggesting to expand the possible area, not totally define it for Red.

Will this fix all the problems? No. White weenie will still have issues of not having that game changing spell that it needs and Red will struggle with stuff it can’t burn away. But this an help with some of the flavor and mechanic issues of these two colors. They both love combat, and are proficient at it, but should approach it from different directions. White has Soldiers and Knights while Red has Rogues and Warriors; they conjure up conflicting images of order and chaos. Their approach to small creatures should be the same as well.