I am a huge fan of the new Commander products (Obviously, since I run a Commander/EDH blog, you know). I love what they’ve done with the decks and they look very fun and interesting to play make it a huge bonus.

Everyone loves the new cards; well everyone but Legacy players. This is a huge experiment for Wizards to print new non-booster cards, one that I think is turning out well. But I wanted to take a look at the cards and their design. There are some that are a complete hit with design that could only be published in a set like this. As for others, this might not be the only time we’ll see them printed.

Here are my top 10 new cards in terms of design, not play ability. I leaned a little bit harder on cards that fit better in the Commander format than one on one play. You’ll also get the chances of the card getting reprinted again in a different set (Like a Core Set or even an expansion). While there was a ton of new and interesting design concepts (Skullbriar is awesome), I’m just looking at the best of the best. 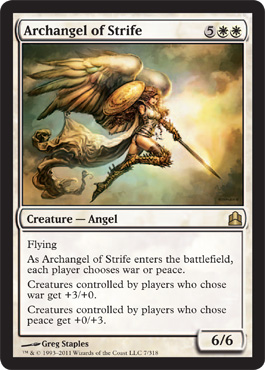 One of the “Fab Five” cards (the first previewed of this set), this gave players an idea of what Wizards was trying to do with this set. I love the War/Peace set up (only can be done in a set like this), and how it plays on White’s combat mentality; can be the great warrior (White Weenie style), or the great protector (Stall for as long as possible). This is multi-player greatness and only missed out on the top 10. 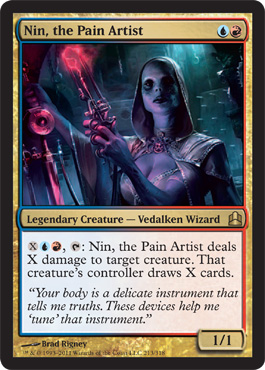 Blue/Red cards are loved by a certain population of players (MaRo for one) but are so hard to design. There is some, but not much, crossover between the colors and usually the colors have to resort in the Chinese Menu design (take aspect from one color and another aspect from the other). Nin does just that, but does it in an elegant way that can open up deck design for the varied of Izzet players.

This is an Oprah card. “You get a dragon! You get a dragon! Everyone gets a dragon! Well, except you, jerk.” It’s like the Doomsday Machine in Dr. Strangelove, it works best when everyone knows you have it. But this is completely Red: ignoring the future and trying to kill a single player now. Who cares if another opponent now has a Dragon 3 turns in the future? Go after that player right away.

Yes, I am giving this card a little love since it was my Commander preview card over on GatheringMagic.com, but everything I said over there makes sense for the color. We’ve seen this effect before (Mana Severance) but not on a creature. It fits for Blue because of the Leviathan flavor: eating lands to do something; in this case to get larger. It could see reprinting in a Core Set, or similar casual oriented product like Commander was.

So much of this card is filled with awesomeness, and while some of that is with the art, the effect is real cute. Blue is known for Clone effects, especially with the graveyard (Body Double), Black is known for exiling cards in a graveyard for an effect (Sutured Ghoul), and Green loves +1/+1 counters (You really don’t need examples of this, do you?). This is quite possibly the most fun and varied card of the whole set and I know a ton of players who are looking to use it as a Commander. 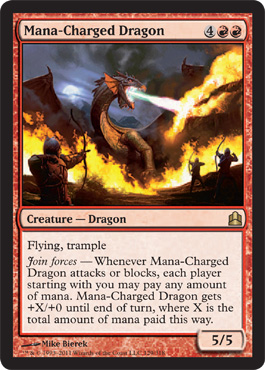 This is the only one card that has Join Forces, so I’ll talk about the mechanic here. It’s a very multi-player friendly mechanic but this could’ve gone two ways. First, it’s the way that was printed: everyone can pay into it and everyone gets the bonus. Or, everyone can pay into it and only those that did get the bonus. I’m sure both ways were tested (Something I haven’t asked yet, but should), but the wording was chosen for a reason. This dragon is the best of the cycle because you can still play political games and not get the backlash if you don’t pay into it. Red loves firebreathing, and allowing everyone to pay into it to kill a player is chaotic and aggressive, both Red traits. But it’s a really horrible name.

Again, you’ve got Green’s love of +1/+1 tokens, and Black’s love of sacrificing things. The real issue here is the White in the mana cost. If there wasn’t a reason for the White, it would be simple enough to just print this as the B/G legend. White has a long history of tokens, especially recently, but it’s not like these colors were devoid of them either. I would direct your attention to Twilight Drover and see how that’s pretty similar to Ghave’s third line. While one card doesn’t mean it’s tradition for that color, it does make this card more in expectations. 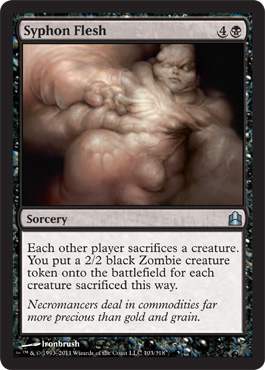 An obvious cycle with Syphon Mind and Syphon Soul/Life. It’s such a simple card idea I’m surprised that I haven’t seen it printed before this. Printed in a multi-player focused set, it completely shines here. Listen, it’s not bad to have such an obvious card design; sometimes the expected is a nice place to hang out. I love the art on this one; not something I would hand on my wall, but hauntingly beautiful.

At first glance, it looks like a White Grave Pact. Just like the Black enchantment it can be game breaking, but the real key here is that it’s symmetrical. Just like Balance, it treats everyone “fairly.” but it’s also acts as a retaliation. A combination of Karmic Justice and World Queller, this is acceptable destruction in a color that completely believes in the “Eye for an eye” belief.

Finally, a Green/Blue Legend that isn’t a combo oriented card. Both of these colors have histories of drawing cards when dealing damage to opponents. The key is the subtle tweak which makes sense. Green doesn’t mind if other players take advantage of it (Vernal Equinox) as long as it’s natural. Blue on the other hand, wants to play the political game and “suggest” to avoid attacking themselves. By diverting your attention elsewhere, Blue is playing a Jedi mind trick and taking advantage of it.

This card tells a story: I launch an acorn across the battlefield and hit a Goblin on the head. If it’s a small Goblin and it was a direct head shot that nut could kill it. But most likely it’s only a flesh wound. Then, a Squirrel comes out of the forest and starts to eat the acorn. You wave your hand and suddenly that squirrel is fighting on your side. It’s cute and not many cards today make full stories like this card.

2 – Chaos Warp
Deck: Political Puppets
Chance of Reprint: Only a matter of time 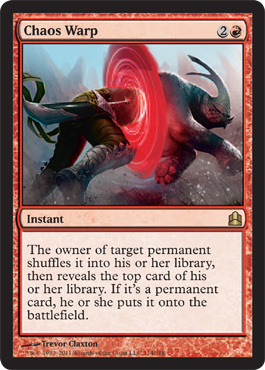 The Red Vindicate. This is one of the best Red spells ever printed. Red has messed with bouncing permanents before (It fits with the “Only the now matters, screw the future” attitude). But never before has a spell given the color what it’s been missing: complete random chance. Sure, you get rid of the problem now, but you could be given something much worse. Red is willing to take that chance. Mark my words, this won’t be the only time you see this card printed.

1 – Command Tower
Decks: All of them
Chance of Reprint: In the next Commander product

Hands down, the best designed new card in the set. This is so outside the box it’s insane. While I was expecting tri-colored lands like in Shards of Alara, this is much better. By tying the land to your Commander, it allows the card to be played in almost every deck and only the six that the other lands would’ve been able to have been in. It’s not fetchable, but it’s a painless City of Brass; find me a casual player who doesn’t like this. Players want to play their cards, not jump through hoops to be able to cast spells. Some might complain that this is useless outside of Commander, but this is a Commander product. This is the one card that if there ever was a Commander promo, it would be this most likely printed as a promo.

There were plenty of cards that were great designs, but these were the ones I felt to be the best. I intend to do something a bit like this with the Scars block, only more intensive. Join me next time when there will be more words on the blog; hopefully related to Magic.