I get emails every once in a while (If you didn’t know, the style/grammar guides have said that you don’t need the hyphen in email anymore). You’re free to send them to me (my website @ Gmail dot com) and I’ll try and answer them as best as I can. Sometimes I get email questions about topics I’ve got slated to write up. So that’s what you’re going to get today.

I’m fine, thanks, how are you?

I really enjoy the work you’ve been doing with mtgcolorpie.com; especially the analysis pieces.

Suck up. No, I’m glad someone reads my work out there. I hope he secretly likes all the script stuff I do. Odds are someone has to.

I have a question that I’d like to ask you. Would you happen to know why some cards are designed with single colored mana costs and others with double? Beyond the obvious reason of increasing or decreasing the ability to splash and/or increasing or decreasing power level. I’m having trouble trying to grasp this particular design choice in relation to the color pie and the flavor of Magic; for example; why is Deep Analysis 3U and Concentrate 2UU? I’m really curious about your thoughts.

You’re mostly there. It all comes down to the Color Pie. Doesn’t it always?

Say you and I were both Planeswalkers in the Multiverse. You favored the Blue magic while I favored the Green magic. We can both cast any spell we want since we have access to any of the colors, but we’re better suited for our own colors better than the other colors. We both wanted to cast a Blue drawing spell. You decide to cast Concentrate:

And ignoring the fact that I can cast that in Green with Harmonize, I choose Deep Analysis:

(We’re also glossing over the fact that you can cast the Flashback cost, though that does play into the role of its cost slightly. Just go with me on this one).

You paid more Blue then I did.

Besides making a card splashable, the more colored mana symbols there are on the card the more it fits into the color. You have to be invested in a color to be able to get the benefits that color provides. If you look at the example above, drawing cards is mostly a Blue ability, so it only makes more sense that if you pay more Blue you would draw more cards in that situation. The more you pay of one color, the more powerful it can become.

But it’s not just power, like what you suggested, it fits better into the color. Plenty of times they are going to be the same thing, but not always. Let’s say we both wanted to cast a Green creature on turn two. Here’s a creature you can cast as the Blue mage (assuming you had access to Green mana):

While I, being the Green mage, can cast this on turn two: 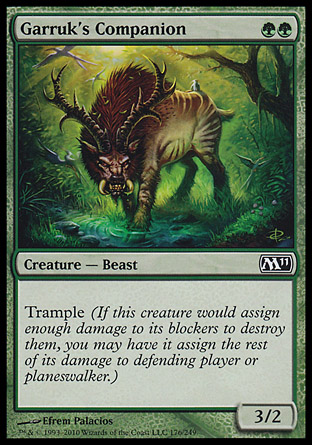 Because I was willing to invest more Green mana into this, I get the “better” creature. But adding a colored mana doesn’t always mean it’s better, it just means it’s more reflective of that color. Example:

Both of these serve similar roles and for the same converted mana cost do almost the same thing. However, if you were playing a Red deck and you needed only one of these types of effects in your deck, which one would you choose? Molten Rain, simple. For the off chance that you might need to kill that nonbasic land, you’d get a bonus. In mono-colored decks, it doesn’t matter how many colored mana is in the casting cost because they’re more than happy to pay for it.

Ignoring the whole debacle that was the Vivid Lands/Reflecting Pool combo, Cryptic Command should have really been only accessible to Blue decks. This is completely a Blue card because everyone of its abilities is Blue. Not everyone should have access to Blue spells if they’re not playing Blue.

This is also the reason why all hard counterspells have to cost at least UU (if not more). By hard coutnerspell I mean that it can counter anything with no restrictions (Mana Leak they can pay 3 more, Flashfreeze can only counter Red or Green, Mental Misstep can only counter spells with converted mana cost of 1).

All of the non-multicolored/non-Karn Planeswalkers are at least double mana in their mana cost; Sorin Markov is triple Black. These Planeswalkers embody the whole of their color so they can’t just be “splashes” of a color. I bet if WotC had the chance to do it all over again they’d make Jace, The Mind Sculptor cost 1UUU instead of 2UU.

There is some balancing between splashing and feeling it out within the color. As far as I know there’s no strict rule that it should be 3U or 2UU or 1UUU (though by doing that you are making a really Blue card), but just what “feels” right. Cards change all of the time between Design and Development so what you think might be right may not in testing.

You were right for the most part, but I just wanted to fill in some of the missing pieces.

9 thoughts on “Reader Email – Where All the White Symbols At?”