This may not be the most popular post I write. It’s not like I stir up controversy every time I put my fingers to the keyboard so I’m not going too far off the trail here. You ready?

(Ducks throws of rotten fruit left over from Planar Chaos)

And, no matter how much you don’t want to admit it, but Mirrodin Besieged is turning out to be like Planar Chaos.

And I noticed this all when I was going to make a joke. But it sets up to ask a single question: Is this lazy design?

Let’s set the way back machine to just over 3 years ago to Janurary 15, 2007. Mark Rosewater touched on some of the complains of the “timeshifted” cards from Planar Chaos.

The debate revolves around whether or not the design of Planar Chaos is creative. But why paraphrase when I can go right to the horse’s mouth (at least one of the horses’ mouth – not that this means I’m calling him a horse)? The post was by margalis:

My problem is that all these timeshifted cards count against the total number of cards in the set, unlike the TSP cards that are extra.

This set is going to have very few new cards in it. That is extremely lame and extremely uncreative.

Giving an old card a new name and font color is the definition of uncreative. Again, as a supplement I am fine with that. Nearly all of PC is been there, done that. We are all familiar with Wrath, Ball Lightning, etc.

I can appreciate the flavor but I think Kami proves that players prefer a fun environment over a flavorful one. It seems that Wizards has forgotten why many players buy new sets – to get new cards. Not rehashes.

PC has some cool cards but the whole will be much less than the sum of it’s parts. A black Wrath is cool, a green Ball is cool, etc, but put them all together and you have a crusty old set.

How many genuinely new cards is PC going to have? 4?

A blockquote within a blockquote? That’s impossible! BBBHHHRRRAAAMMM!! 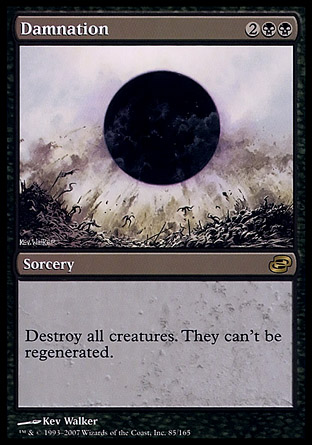 Look familiar? Yeah, that’s because it’s a color shifted this:

It’s everyone’s favorite “What If?” game!

The whole idea of Planar Chaos was to present an alternate reality that could’ve happened but didn’t. Taking a left when you normally took a right and boom, everything’s different. It wasn’t just one or two cards; all throughout Planar Chaos were links to Magic’s past that were in different realities. Not every alternate reference was the same text in a different color.  What if Crovax wasn’t infect, but Mirri was. What if Morphling was Red. Some people (like the one above) called this lazy and not real design. After all, they weren’t exploring new design space so why even design the cards at all?

Magic is more than just cards.

If you’ve been paying attention to the whole promotion that WotC has been doing for this block, you’ll notice that they’re really selling this whole “chose a side” idea. They’re really trying to get people out of the cards an into the world the Phyrexians vs. the Mirran.

Is this a bad idea? No, of course not. This has more to do with the culture and the marketing of Magic as a whole then anything else. Again, look at the previous paragraph. WotC is selling this whole idea of the war that we, as players, are part of. They haven’t even officially told us what the name of the third set, keeping the secret of which side is goign to win. I’m sure everyone at FNMs and at the prereleases this weekend have an opinion on which side should, will and is going to win. You know who’s really winning?

Wizards of the Coast.

You’re discussing about the war, right?

They’re, for once, making players talk about the story. No, not many people outside of Vorthos care about the story, but that’s what’s happening here. This has been great marketing. By making the game more than just cards, they’re making people emotionally invested. Being emotionally invest is key to people staying with this game. Again, I’ll touch on it another time, but Magic players right now are playing the “What If?” game.

In Planar Chaos, it was “What if this happened instead of that?” You know, it’s the one your wife or girlfriend plays with you right when you’re about to fall asleep. Back then, no one really cared all that much except for the design/flavor enthusiasts (such as myself), and story/flavor fans (Vorthos). How many people were bringing up the fact that it was great to see Crovax back in Standard?

And please don’t give me the argument that if pro players didn’t care, neither should we. The Pro Tour is just one part of Magic. Most of them might have an opinion, but most likely don’t care as long as WotC is still printing cards for them to play with. Having a card like Harmonize not fit in with the color pie won’t prevent them from playing it.

For Mirrodin Besieged, the “What If?” question has now become “What if the Phyrexians invaded Mirrodin? Who would win?” While this isn’t like the eternal argument “What if Superman and Batman fought, who would win?” it’s a good one for the world of Magic. While taking over the plane, the Phyrexians have decided to assimilate its inhabitants; that seems like a pretty basic idea. Remember the Pod People from 1950’s B movies where the aliens try to take over the world by taking over our bodies? Which leads me to the idea of the joke post I was going to write:

How do you design a Phyrexian invaded card?

Take a famous card (hopefully from the Mirrodin block): 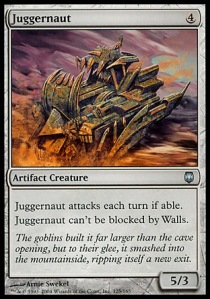 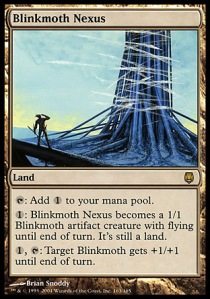 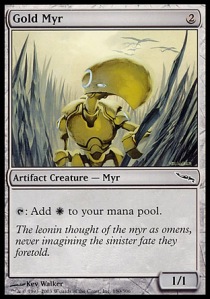 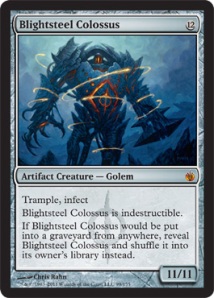 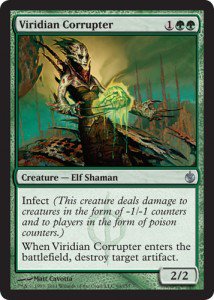 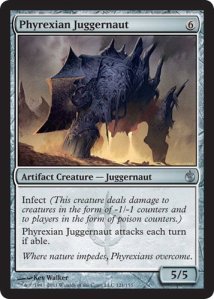 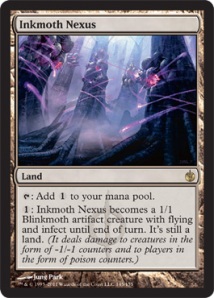 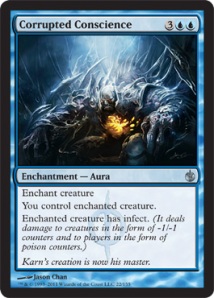 Maybe mix around a little with the mana (but not necessary). Done.

How many genuinely new cards is Mirrodin Besieged going to have? 4?

Let’s go back to the initial question in hand: is this lazy design? Some people seem to think so. However, I doubt he’s looking at the bigger picture here. He’s taken one card and completely dissected it and went: yep, lazy. He says:

Because Darksteel Colossus was a unique, iconic card rather than a staple effect, it was a poor candidate for the “set mechanic spin-off” treatment. It should have been left alone.

But that’s why it was chosen!

Imagine you’re the aliens invading another planet. If you’ve got the chance to take something powerful and iconic of their and turn it to your side, are you going to pass that up? “Listen, I know you like that guy and we’re going to leave him alone to respect you. Fair fight, right?” No, that’s not what you’re saying, not when you’re the Phyrexians. “You know that big powerful weapon you were planning on using against us? Yeah, it’s now ours and we’re going to stomp your faces in.”

All of the Mirrodin block cards from above were iconic, obviously leaving out the Affinity cards. Suddenly, showing your enemy you converted their icons is a huge moral defeat. “All will be one,” you’re saying.

When you design a set/block, you just can’t go card by card basis. How does this fit into the story we’re trying to tell? And when you are trying to sell the story more than other years, choices like this have to be made. I believe that Planar Chaos failed from that aspect because a majority of players didn’t care about the story. Not so with Mirrodin Besieged.

Magic is more than just cards.

Looking at this in a vacuum, yes, Blightsteel Colossus looks like a horrible idea. But seeing how this fits into the bigger picture, it makes much more sense. “But it’s too powerful,” I hear people complain.

Too big, too dumb, too strong. This card is like strapping a ballistic missile on the back of an atomic bomb.

“Listen Mirrans. We’re going to take a really powerful weapon from you, make our own changes, but we’re going to make it worse just to be fair.” This card is a tank, a battle-cruiser and a stomping machine all in one. This is not going into every deck, casual or competitive. We’re talking about one more fattie that players can chose for their deck to kill an opponent. Will players abuse it? Of course, they’ll abuse any card or concept they can get their hands on.

Having a villain that takes over everything is what the Phyrexians are. But, if you don’t show them taking over everything, how can you demonstrate how they’re the villains? If you don’t this route, you’re going to have to introduce characters and locations. You, as the player and participant, don’t have the emotional connection if Sam, the character who’s a new character to the story and now a zombie, attacks you. If Vern, who’s been with you for years, becomes a zombie, it takes on a whole level. You care, you’re mad, and you’re invested.

No one cares about the new character that was set up to be turned into a Zombie.

While the joke is that you’re seeing a ton of “repeats” from before, only changed slightly, this concept is not new. Players will get mad because they think WotC isn’t being creative. They don’t design these sets in one day and go, “Wonder if anyone will notice.” Everything, especially this set has been talked about for months. In GDS2, WotC has been pitching the idea of more than just a card, but a whole flavor/world design you have to look at. This “lazy design” makes sense with that concept.

No card is bigger than the game.

Of course, if you don’t like it, you don’t like it. This isn’t everyone’s cup of tea. But for me, the designer and storyteller, I love it. If you’ve got a problem, then take it up with you know who:

(Goes back to dodging fruit being thrown)

5 thoughts on “Design Class – We Have a Lot In Common, You and I”