It was announced yesterday on the Mothership the names of the Intro Decks in M11 (now 60 cards), and the foil rares we’ll be getting with them. Each color gets a shiny new creature to play with in iconic creature races.

Green, being the creature color, should have some iconic large creature that is easily identifiable in its color but doesn’t; Elves aren’t as big, size-wise, as Angels. It’s the only color with this issue.

Black has Demons and Vampires.

That’ll strike the fear in your opponent. “Fear my Wurm!”

Yeah, let’s not go there.

But what does it even matter? Green has Beasts and Wurms as large creatures, they don’t need iconic creature type help. Oh yes they do, and even Wizards has acknowledged that as well. Way back in 2006 Devin Low said as much:

…The fact that we usually make these Iconic creature types awesome feeds into everyone loving them and thinking they’re awesome, which feeds into us making them more awesome, creating a self-fulfilling loop. I love that. And I love casting Dragons, Angels, Vampires, Demons, and Legends….

Putting power into Iconic creature types and green’s lack of iconic creature types is one of the key reasons for the lack of green in the top ten lists above. From the Onslaught top ten, why are Exalted Angel and Eternal Dragon super-pushed? Largely because they’re an Angel and a Dragon!…Since Green doesn’t historically have a top-tier rare iconic creature type this awesome, it has missed out on a lot of that bonus power we give to them. 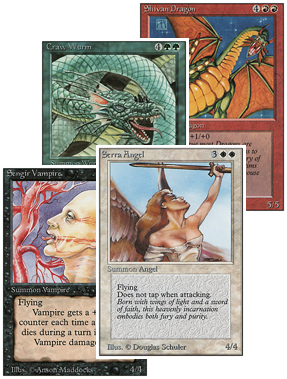 Pushing iconic creatures are a given when it comes to Magic. Ever since the beginning of the game, these iconic creatures helped sell Magic and were some of the lasting and more popular images. Not everyone knew what a Lotus or a Mox was when Magic first started (and maybe some new players still don’t), but summoning an Angel or a Dragon to fight on your side, that’s pretty bad-ass. The game needs creatures that can be identified with the game and Genre. If this was a space-themed game instead of a fantasy based one, you’d have Aliens and Spaceships. You need icons because that’s how people identify with something, hence its definition.

To the right I’ve put together four “iconic” creatures that were printed in Alpha; anyone who played back then surely remember these cards. All but one were taken out of the Core Set in future printings only to find their way back again. You think it might be Craw Wurm, but Shivan Dragon has not left the since the beginning. When someone mentions a Dragon in Magic, you automatically think of our good old friend Shivan. And when Serra Angel and Sengir Vampire both returned, there was much rejoicing; these icons were coming back to Magic.

I might have been the only one excited to see Craw Wurm when it came back in 8th Edition. Why? For me, it brought me back to a time when I would fill my decks with those guys and my friends would tremble when I played it; after all, it was a 6/4 that was almost bigger than everything. It’s iconic for being Green: a big giant creature. Some might argue that Force of Nature might have been Green’s iconic fatty, but no one liked having to pay that upkeep or have it deal damage to you.

As you might have noticed, Blue didn’t have a big iconic creature that I featured. And what would I choose, Mahamoti Djinn? Sure, I guess that’s a little iconic, but Djinns and Genies faded out over time and aren’t considered “real” fantasy icons. Then again, wurms aren’t either but continue to be used in Magic more often than not. The problem is, most of them aren’t rare; 13 out of 39 Green Wurms in Magic are rare. Yes, there are almost 40 different Wurms in Magic; compare that to 52 White Angels, 37 Red Dragons, 35 Black Demons, and 47 Black Vampires (and while there’s smaller Black vampires recently, I believe there’s enough big ones to justify this).

But let’s see this another way. Here’s a rarity breakdown of these five races plus the “new” Blue iconic race Sphinxes (which we’ll get into in a minute) with the last pack-printed rarity breakdown (meaning put together sets like Duel Decks won’t count). Just for fun, we’ll include Green’s other large iconic tribe, Beasts. All of these stats are mono-colored:

Sphinx looks so low since we haven’t added multicolor (which we’ll do in a sec). As you can see, every one of those other large creature types has almost 60% or better as rares or Mythics except for Green creatures. Angels are abnormally low but share the lead with most Mythics. This is part of the issue: Green doesn’t have a real identifiable large icon creature because it’s spread out across the rarities and not made special.

Having an icon makes designing cards a little bit easier. You want a flying rare Red creature? Guess what it’s going to be? Slap on something that you think a dragon can do and you’re on your way. You don’t want that Angel you just opened up to suck, right? The expectation of having an Angel or a Demon be powerful is on every player’s mind. I doubt players really care if that Wurm is really awesome, right?

Let’s do the same chart again, but have it include multicolors this time. To be on this table, the creature must have a base color of its creature type.

Taking a look at these numbers we can conclude several things:

Blue used to have this problem that Green currently has: no iconic fatty. With the introduction of Sphinxes in Ravnica, Blue found their iconic fattie race. While not a “traditional” fantasy race (much like Djinns and Genies), Sphinxes are mystical enough to see inclusion as a major fatty in Magic (and Genies have been brought back in M10). It’s a flying creature with the history of being smart which totally fits into Blue’s flavor. Infact, if you look at all the fatties, it all makes sense. Dragons firebreathe and destroy/cause havoc (Red’s flavor), Angels protect/attack and set rules (White’s flavor), and Demons kill things/do stuff with the graveyard and help players do “evil” things (Black’s flavor).

That’s one of the issues with this whole problem: what about Green’s flavor. Back to what Devin Low said earlier:

…The fact that we usually make these Iconic creature types awesome feeds into everyone loving them and thinking they’re awesome, which feeds into us making them more awesome, creating a self-fulfilling loop. I love that.

Yes, it’s that loop that has pushed Green from having high quality fatties that you see in tournament decks (Bloodbraid Elf is not a Fatty and Broodmate Dragon is in Jund and a Dragon, so it doesn’t count). Name the last mono-Green fatty that rocked a tournament (Tarmogoyf is not a fatty)? Kodama of the North Tree? Chameleon Colossus if you’re stretching it? It’s been a long while since players have put a huge Green creature in the red zone to pound face in Top 8’s (If it used to be all that common in the first place). Because Green is the creature color, how do you personify that into having a Green iconic fatty?

You make it the creature fatty.

In the last few sets, Wizards has introduced Hyrda as the Green fatty. Well, kinda fatty since some of them have X in their casting cost. Looking at the Hydras in Magic, they started out as Red, then finally moving more and more Green. While the whole idea isn’t completely fleshed out yet about what Hyrdas are going to do, but at least Wizards is trying to have it be the big Green iconic fatty. Tweets Aaron Forsythe:

What would Hydras do besides grow heads (getting bigger)? According to mythology, that’s all it does. Khalni Hydra might be a step in the right direction seeing how you can get a big fatty creature for cheap with lots of other creatures in play, something that fits Green’s flavor. Having a creature with many heads can make it seem like multiple creatures, which is the great irony/awesomeness of have a creature fatty. This is a great opportunity to take something iconic fantasy players know and make it fit into the Magic world; the possibilities are almost endless with what this Green iconic race can do.

If you want to see the breakdown of Hydra using the same chart as above you get this:

Well, seeing how it’s in transition from Red to Green that last number is forgivable. Somehow, I think we’ll be seeing more of this multi-headed beast.

This is where you guys come in: let’s hear some ideas for what you would like to see in Hydras. I’ll let you throw out ideas in the comments. Don’t give us the whole card, but just what kind of things would you like to see Hyrdas do. Sac a head (+1/+1 token) to give a creature shroud until end of the turn? Rosterbate down below. If you don’t like the idea of Hydras, what would you suggest using then?

Thanks to @RobJelf for some of the ideas in this post, who was in my head with what I was thinking as well.