Everyone has always wondered “What if there was a sixth color in Magic?” Ever since the first InQuest article that spread the rumors of it to it almost being in Planar Chaos, adding another color in Magic is a pretty fun thought experiment.

Thanks to my blogging friend Salivanth, who I stole the idea from (He’s a tournament blogger while I’m the design blogger, I will write a tournament post to get him back), he touched on it briefly by looking at an very interesting concept: what if Magic only had four colors? What would change in the game? What color(s) would have countering, and discard, and mana ramping?

I’ll take a look at each of the colors as if they weren’t there and who would get what mechanics (the complete opposite of Purple because what mechanics would each color have to give up?). As a bonus, you’ll get some cards from this hypothetical game. But not everything will be a straight pull to another color as some famous cards would have to be multicolor or have certain mechanics to replicate the missing color’s abilities.

Now, just like my Color Pie Project, each color will get it’s own week to disappear.Fist up, we’re going to see what it would be like without White (This time going around our color wheel not alphabetically). What would happen to the order/chaos battle? The “Good” versus “Evil” battle? Would there even be life gain in the game anymore (Hint: yes).

Just to wet your appetite, here is a famous Black card that would be printed differently if there was no Black: 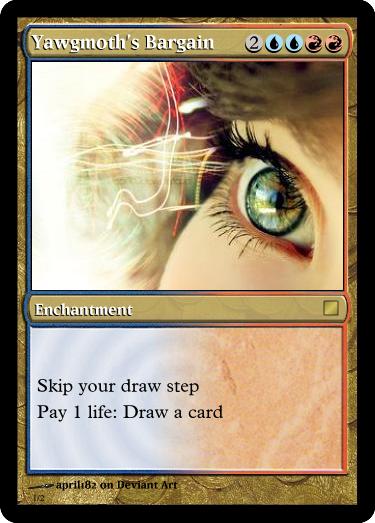 2 thoughts on “What If Magic Only Had Four Colors? – Intro”