Yesterday was commons and today we go up in the rarity scale to uncommons (as seen by the title). There are some interesting choices here in silver land as I believe one of the best cards in the set will be shown here today. One color was completely hard to choose since there was so many new good choices. I really like what Wizards did here in this Core Set identifying the colors, much better than previous Core Sets.

Remember, these cards are one that haven’t been printed before since this is the first Core Set with new printed cards. I’m also not looking at functional reprints (bye bye Act of Treason) nor cards that changed rarity (welcome back Serra Angel). As the name suggests, this is “virgin” pie, something I’m sure that most gamers are familiar with (Ugly stereotype, I know it is but the jokes write themselves). 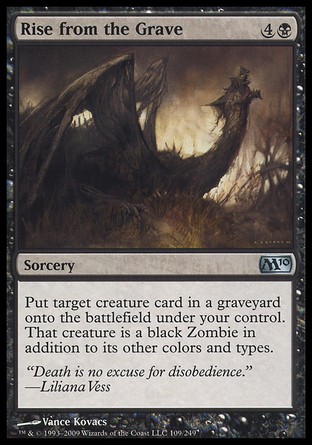 Rise from the Grave – 4B
Sorcery
Put target creature card in a graveyard into the battlefield under your control. That creature is a black Zombie in addition to its other colors and types.

While it does cost more than Zombify, I believe it’s a better one. If you brushed over the card due to it’s casting cost, please note that it does say “in a graveyard.” As we learned in Fight Club it’s company policy never to imply ownership…, it’s always a, not your. As a Black mage you should be able to take control of your opponent’s graveyard. Also, the fact that it now turns the creature into zombie (which would’ve made more sense on Zombify) is perfect flavor for Black.

Also Ran –
Howling Banshee for paying life for a good flying creature (bonus that it hurts your opponents as well). 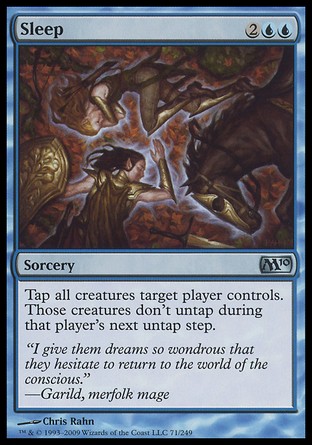 A spell Blue has been missing for a while (in terms of actually shutting down creatures for a turn, something I don’t mind seeing Blue getting in terms of of a “Time Walk” effect), the most interesting part is the fact that it says “target player.” That’s right, if it gets redirected, it could hit its caster as well. Tapping creatures is nothing new for Blue, and I greatly enjoy this version of “taking extra turns” that doesn’t completely take a player out of the game.

Also Ran –
Wall of Frost for another way of keeping creatures tapped in a flavorful way. 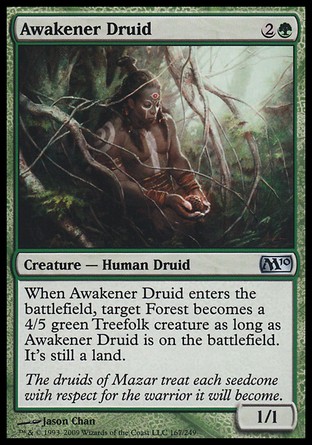 In a color chock full of new uncommons, I believe that this is the best representation of Green in the Core Set. In dealing with nature, Green has the power to turn the inanimate land to a stomping creature. This is also good card advantage for Green as you can get a semi 2 for 1 (If you kill the druid the big creature goes away but it’s still a land. It’s an interesting play to ask which creature you go after). The key to all of this is the fact that this “combo” feels Green: having a creature, not spell, turn a land into another bigger creature.

Also Ran –
Acidic Slime for becoming the creature incarnate of Creeping Mold, Cudgel Troll for being an aggressive creature, and Nature’s Spiral for being a fixed Regrowth (by only getting permanents something Green is known for). 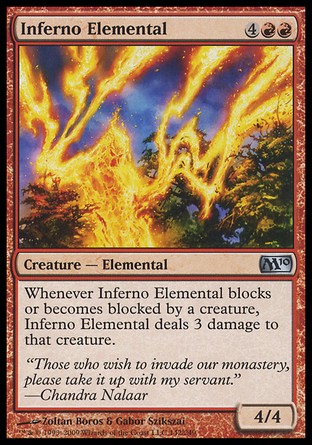 Sadly, this is the only “new” red uncommon so it earns this spot no matter what. But the good thing is that it does so a good side of Red, although in a completely different way. Both Red and White have double strike and this is a pseudo-double strike of sorts. It will get to do 3 damage no matter what when it is blocked or becomes blocked but do even greater damage once combat damage is dealt. This is Red’s way of being quick with the damage (in this case, being an electric fire being), it hits your creature before your creature has had a chance to respond. I like this design. 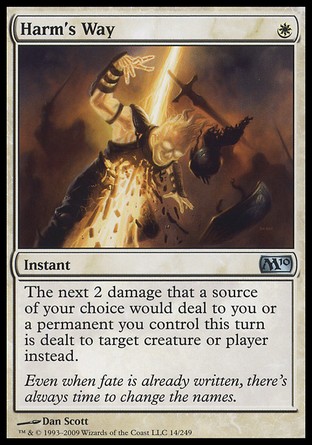 Harm’s Way – W
Instant
The next 2 damage that a source of your choice wold deal to you or a permanent you control this turn is dealt to target creature or player instead.

White direct damage? You bet. Besides being one of the best cards in the set, why is this completely a White ability? It first started with the en-Kors and then progressed up to Shining Shoal and now this, so it’s not like this ability comes out of no where. But this direct damage is reactionary, something most of White’s spells are, and in a protecting nature, another White trait. This is not an aggressive spell at all and shows that White can fight back. Do I want more of these types of spells? Like you wouldn’t believe.

Also Ran –
Rhox Pikemaster for believing that sharing is caring.

That’s it for today. If yesterday was commons and today was uncommons, guess what tomorrow is. Remember you can follow me on Twitter or send me an e-mail mtgcolorpie_at_gmail_dot_com. Voice your opinions here or on Twitter.